Now, when I went surfing onto the NYT site and found the review of Michael Wex’s new book BORN TO KVETCH, you could have knocked me over with a feather. For the man, you see, is a genius. The kind of genius who delivers his material in a manner so deadpan that it takes just a few seconds for you to get that yes, he’s actually being funny. And then laughing uncontrollably because it is funny. And stays that way (especially when he’s doing a Yiddish version of 50s rock ‘n roll, complete with attempts at the splits.)

Michael Wex’s kvetchtacular new book gets a rave from the New York forking Times! Except they print a photo of… some zhlub? Who the hell IS that?

Beats the hell out of me. This has to be the most bizarrely dissonant author photo since the days of J-Franz. See for yourselves. At left is the NYT’s version of Wex. And at right…is something closer to the real guy: 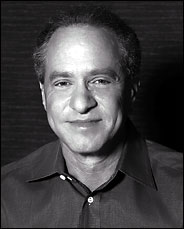 I was super tempted to put the perfectly developed portrait* on the front page, but I thought not enough of you had drunk your morning coffee for that…

*there was a link up, but it doesn’t seem to work anymore. It’s the second picture on the main page here, anyway.